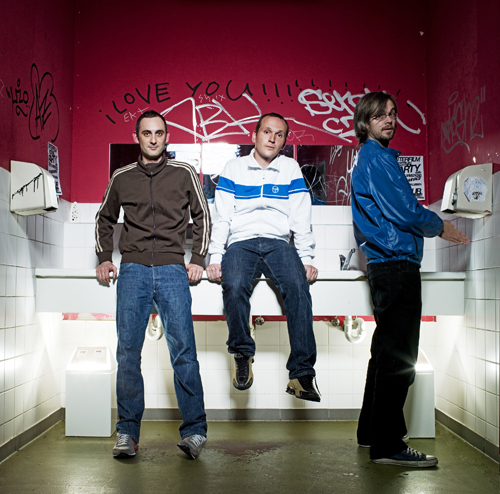 Would you believe me if I told you that FUJIYA & MIYAGI are closet R Kelly fans? If nothing else we ‘outed’ them during our interview with the trio who continue to fill dance floors around the globe either in person or by means of digital playback. Three of the four: Steve Lewis, David Best and Matt Hainsby from Brighton (UK) spoke candidly about finally quitting the day jobs, the long road to the first release and why their live show doesn’t suck!

At the point you started to enjoy success, how was it getting to that point in the journey?
Matt – It felt quite natural really. We basically started about 10 years ago. Things just happened. It didn’t feel like such a big deal because there’s always something good coming along. My girlfriend said I should get more excited. I’m like yeah, I am, and she’s was like… ‘well show it!’.

David – But also, we were sort of busy planning shows or the next record. We don’t, you know, type our name in Google and see what comes up! Obviously when we played shows, and there were people there, I could see if they like us or not. But I’m not monitoring what people said about us, so I was sort of unaware of how well it was going, or how badly. I didn’t want to know.

You worked a long time on the first album. What was it like to give up your day jobs before going on tour to the US.
David – That was obviously the best thing…

Your first album ‘Transparent Things’, can you tell me about that process, the development, how you decided its direction. [Your previous album had been “mongy”]
David – We just stumbled across it, really, it was more like when we started playing live, we didn’t want to bore people!

I read that you thought that your live show sucked because it was just two guys running a laptop.
David – No, no, we were aware that that is what it could be. So we were very adamant that we didn’t want that to happen, because that is one of the worst things to watch. Unless you’ve got great visuals, which we didn’t have. So when we started playing live, when we saw people dance and stuff it was pretty good. And also when we first started, we were really into electronica at that time, you know? And Aphex Twin, which we still like. But before them, personally, I really liked Bowie and more sort of, fun music, and soul. We had the sounds but we didn’t have the songs, so we decided to make some songs up to go with the sounds, and speed it up a bit, and voila, here we are.

Were you never tempted at any stage just to get the sack and work on the music while on the dole for six weeks or whatever?
David – I’ve been on the dole before. I did more for Fujiya & Miyagi when I worked than I did when I was on the dole. It’s all right, (but) all your mates are working, you’ve got no money…

In the UK it‘s terrible, I think.
David – Yeah, I did it for about a year but it didn’t really help us.

For me ‘Transparent Things’ was a move towards a more accessible sound to a wider audience. Was that on purpose?
David – No.

It was just a natural progression?
David – Yeah, I think we got better at writing songs. Or we decided we wanted to write songs rather than mumblings over bleeps.

Matt – I think it’s the nature of the songs, the songs have got choruses.

David – But no, it obviously wasn’t deliberate, I think if you try and make something palatable you’re gonna sound rubbish and no one’s gonna like it. So it was a bit of a shock, God people like us, that sort of thing.

What about your fans from your previous albums?
David – All five of them? They’re fine with it.

David – Besides what’s the point of doing the same thing again, do you know what I mean? It’s not like oh this isn’t working, what shall we do? It’s a long period in between the first and the second, hopefully the next one won’t sound like this one.

So you mention Can, Aphex Twin, David Bowie, Roxy Music, Iggy Pop and the Stooges. What influences from the current day would you include?
David – Personally not a lot. I think more production-wise, maybe Steve’s more influenced by hip-hop or house records, how they sound. I try to write new music. The only new music I really like is Joanna Newsome and Smog and stuff I don’t feel any kinship with, say, groups. I like old stuff like Serge Gainsbourg and Can, it just sounds better to me. You get a bit jaded because you think, oh, I’ve heard that before. I mean, I can’t remember the last time I heard something new and I thought, wow!

And what about dodgy stuff? Do you listen to dodgy stuff and say, actually, I could take that and make that? Something like Britney Spears?
Matt – She’s doing all right on her own actually.

David – I dunno. I like pop songs. I like R Kelly ‘Trapped in the Closet’. You know that album? Oh you’ve got to, it’s the most amazing – it’s the shittest – and the most amazing album ever. It’s a whole concept album. Get R Kelly ‘Trapped in the Closet,’ there’s ten songs, all exactly the same. And it’s just the story about how he gets trapped in the closet with this woman. He goes back and then her husband walks in, and then he goes back to his wife’s house and there’s a dwarf there, because the dwarf’s doing his wife, it’s amazing.

Matt – The dwarf’s hiding in the kitchen cupboard, there’s many layers to this.

David – So that’s pretty cool. We couldn’t have done that any better than him probably.

Or any worse.
David – Oh yeah. It’s amazing. But yeah, I dunno, I like the songs, I wouldn’t call them dodgy but there’s some R&B and pop songs that come out every now and again, like that ‘Crazy in Love’ by Beyonce a few years ago. That’s easily the best song of the year. So we’re not really snobby and they don’t have to be German for us to like them.

How do the live shows differ from your recorded material? What extra elements can people expect?
David – I think it’s probably more dynamic, because we’re quite stripped down, obviously we all get a little bit bored and we want to do different things.

Steve – We all sing – or whisper – so that gives it dynamics.

David – No, we’re not. We’ve got really bad dancing. But, I dunno, we like it. We don’t just stand there like scared rabbits.

Have you had any bad gigs?
David – Oh lots.

Any weird moments with the audience?
Matt – We have a fantastic fan who sings in New York, he’s always at the front dancing and kind of miming the lyrics.

Steve – He wears white lycra shorts and a headband.

So have you got any famous fans that you know of at the moment?
Steve – No. A bit disappointed really.

David – Has anyone contacted you?

Steve – I received an email from – I don’t know – Kevin Rhodes.

David – No, you want someone like Dale Winton [UK TV personality] to like you or someone really odd.

Steve – He should’ve bought one, he’s got enough money.

David – Yeah. Like the great R Kelly knows who we are!!!

Since this interview Fujiya Miyagi’s was  joined by 4th member, drummer Lee Adams and released their 3rd album ‘Ventriloquizzing’.