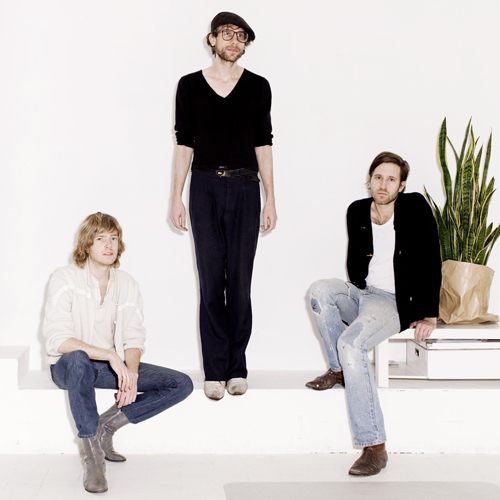 Thieves Like Us came together in Berlin in 2002. A concoction of a couple of a Swedes and a Yank who found solace with each other as they struggled with foreign languages and culture.

Starting out dj’ing, playing old krautrock, italo disco, Bowie, Iggy and a few smatterings of Hip Hop they found themselves un-easing the Berliners with an inconsistent BPM. They further sought an electronic music they liked but were at a loss – so as many bands begin they decided that they could do it better and the way they liked it… et voila – Thieves Like Us was born.

Currently resident in Paris, Thieves Like Us are Pontus Berghe [drums] , Bjorn Berglund [keyboards] and Andy Grier [vocals]. Their first album ‘Play Music’ was written, recorded and mixed all over the place; New York, Berlin, Vienna, London, Rio De Janeiro and Stockholm. They claim the album is mostly about love gone wrong [Drugs In My Body, Lady] and identity problems [Program of The First Part, Headlong Into Night]. Relate we can!

They’ve had a steady stream of releases since, including follow up albums  ‘Again and Again’ in 2010 and ‘Bleed Bleed Bleed’ in 2012.

1.How did you get started?
It was only Bjorn and I in the first eight months… We were spending too much time getting drunk day and night in Berlin; we thought all the other bands were total shit; they had too much attitude and couldn’t write tunes!

Berlin – a hundred idiots on stage wearing trash clothing and a drum machine full of presets. We had enough – so we bought some equipment and started writing songs. We phoned Pontus, our drummer and asked him to come down from Stockholm to participate.

2.What ingredients do you need to mix together to produce the recipe of your sound?
Heartache, spite, and malice plus some classic European cinema;

3.Did your first gig make you hungry for more?
No it was frightening and not loud enough.

4.What’s the biggest ‘cock up’ to date?
I do not understand this question.

5.What is it that inspires you to make your music/sound?
The music is personal, autobiographical, it is cathartic and therapeutic, it is the only thing we can do in this world.

6. What would be the icing on the cake?
A moderate pay check to buy some new equipment.

8. Describe your music as if it were a fine wine.
I don’t drink alcohol anymore, so I couldn’t make an accurate comparison to wine.

9. AfterMint! Does your musical style influence your underwear?
We need a moderate pay check to buy some new underwear.

10. Digestive! What do you know about Luxembourg?
Nothing, I always missed it on geography exams in the States. But, hey AMERICANS DO NOT KNOW THE DIFFERENCE BETWEEN Switzerland and Sweden!