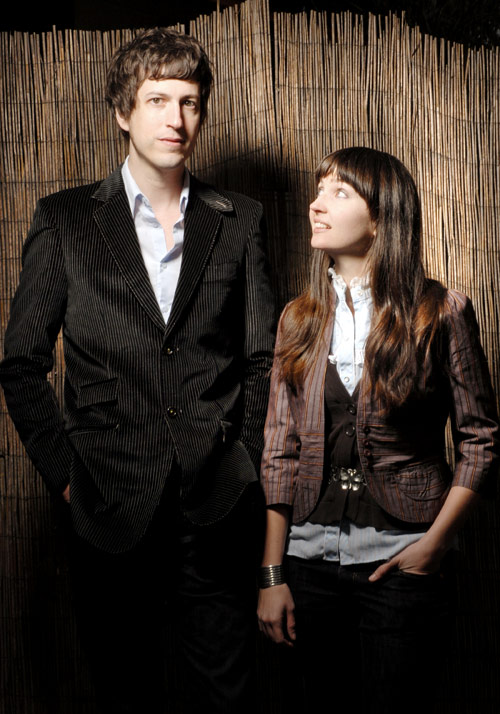 One part mellow folk and one part indie-pop and you’re pretty much understanding the basis of this outfits outputs. They released their debut album ‘Magnolia’ [on Morr Music] back in 2008 to generally harmoniously favourable reviews.

1. How did you get started? & 2. What ingredients do you need to mix together to produce the recipe of your sound?
When I was just getting this project started, I knew that I wanted the Wooden Birds to have some kind of ’sound’. After a 13 years with the AmAnSet, I didn’t want to drift into that dangerous singer/songwriter/solo record territory. Sure I might enjoy that kind of music, but I just didn’t want to make that kind of album.

About 5 years ago, I started pounding out beats on my guitar top instead of using a metronome or a drum machine. I made all the demos for ‘Magnolia’ that way and ended up prefering it to real drums for the recordings. I also began playing bass in a different way that helped give the new project a more percussive lean. I tried to engineer a guitar sound that had very little carry as well. Over time, things began to sound very wooden and so the sound was born piece by piece.

As for the band, I have wanted to work with Leslie for years. She played the cello on an AmAnSet record called ‘The Golden Band’ in 1999. I’ve also recorded a few of her solo projects over the years. Chris helped me finísh the last AmAnSet full length record, ‘Set Free’, so I knew I liked working with him. I spent a lot of time with David and his band, Ola Podrida, and so of course that was an easy call to make.

3. Did your first gig make you hungry for more?
I was a bit nervous, to be honest. I didn’t tell anyone about it, but many of my friends and former bandmates from the American Analog Set were there.

4. What’s the biggest ‘cock up’ to date?
I spent this winter putting a band together and then found out from a mutual friend that our drummer was playing with another band this spring. It was a bit like going to the dance and seeing your boyfriend with his new girlfriend that he neglected to mention. All of sudden your dress looks pretty foolish! Oh well. All’s fair in love and music I suppose. Really, it worked out for everyone. It was a lonely dance though.

5. What is it that inspires you to make your music/sound?
Heartbreak and a mild obsession with death.

7. How will you be remembered? (what will make you vintage?)
There is very little you can control about that. I’ll keep trying to write better songs and find my voice, whatever that means. I’ll remember myself for the love I put into every minute.

8. Describe your music as if it were a fine wine.
If we were a wine, we would be the bottle that the shop recommends when you ask for the best 12 euro bottle they have. A secret favorite. Inexpensive but easy to drink. Simple, but with layers of complexity that reveal themselves mid-glass.

9. AfterMint! Does your musical style influence your underwear?
Oddly, yes. I think my new band is awkwardly sexy. I’ve been trying to choose underwear to match.

10. Digestive! What do you know about Luxembourg?
I know Luxembourg is small. I understand that that Luxembourg is a dangerous, lawless land… much like the old west in the US. I’ve also heard that while bears are everywhere these days, all bears can trace their roots back to the area. The Adam and Eve of bears, if you will, were from Luxembourg.