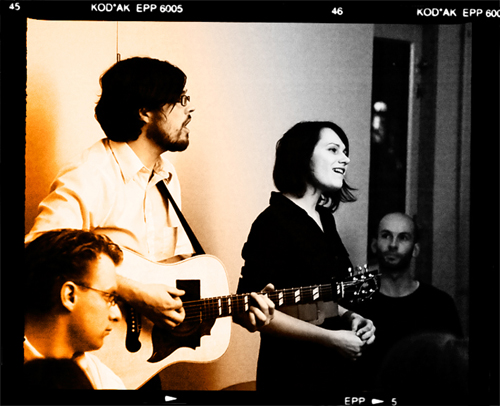 Rue Royale (US/UK) have been on the road, quite literally! It’s a timeless quest from the acoustic duo, who’s melodic tunes induce pure auditory pleasure with seemly little effort! Seems like they’re always on an extensive tour schedule which, they are well advised to bring along trusty sat nav ‘Shelly’, seeing them play many corners of the European mainland & US.

‘Shelly’, along with their kick drum, shakers and guitar resulted from a decision to jack in the ‘normal’ life and become a full-time band. Married couple Ruth & Brookln Dekker moved out, sold up and hit the road. That was back just in March 2008. They forged forward scheduling a 20 date European tour which boasted sell out concerts in Germany, the Netherlands and the UK.

Brookln, the ‘US’ component of the duo, grew up in St Louis whilst Ruth, the UK element, heralds from the Midlands county Staffordshire. They met when Ruth was state-side, later marrying and setting up home in Chicago. Their name ‘Rue Royale’ comes from a road in the Chicago suburbs.

The first fruits of their labour was in the form of their 2006 EP, ‘The Search For Where to Go’, and was since followed up by their debut album at the start of 2008 – the self titled Rue Royale. If you are lucky you may still be able to get a handmade/hand stitched copy! And most recently followed by 2011’s ‘Guide to an Escape’.

1.How did you get started?
In 2005/2006 I was in a rock ‘n roll band in Chicago called Trevorside and the band was coming to an end. After rehearsal one night I came home to Ruth and was venting about it all and we ended up writing a song together (Even In The Darkness). It was the first time we had ever tried writing together and we really liked the tune. We recorded a quick demo of it and sent it around to our friends and everyone seemed to be quite positive about it and encouraged us to continue writing together. We did and in about a month’s time we had 5 songs written for our first recording together ‘The Search For Where To Go’ EP.

2.What ingredients do you need to mix together to produce the recipe of your sound?
Well, when we started writing our first batch of songs together we lived in a flat in Chicago with a grumpy (I’m being kind:)) upstairs neighbour. She was hateful to us often and so in an effort not to disturb her, when we played music, we did so very quietly. We also found that getting the mood right in the room with some candles and little light was inspiring and ushered us into a creative space. Hence the ‘candle-lit, hushed sound’ of Rue Royale. Funny thing is, we don’t live anywhere near that crazy neighbour anymore but we still have had to rehearse/write with the ‘hushed’ sound as last year we sold all of our stuff and moved in with friends and family so that we could afford to tour more and focus on the band full time. So living in other people’s home we still find ourselves whisper-rehearsing.

3.Did your first gig make you hungry for more?
Our first gig was hands down our worst performance ever. In fact, I was so discouraged that I said I wouldn’t play another show. Fortunately, I had already had a second show booked and wanted to honour that. The second show was a huge leap forward and therefore we decided to march on…

4.What’s the biggest ‘cock up’ to date?
They are countless and too many to rate best or worst. I screw up all the time. I think that’s part of the charm of our band. We don’t pretend to be anything we are not. We’re a family and a band. Therefore we are very comfortable with each other and are more free to try new things. Unfortunately most of those end up as ‘cock-ups’

5.What is it that inspires you to make your music/sound?
I’m not sure if it’s inspiration or necessity. What I mean is that when I’m not making music or being creative I tend to get a bit down and depressed. It’s just something I have to do. As far as lyrics go, we tend to draw on past experience and inner monologues. You know, like questions we all have about life and stuff. We’re not really trying to change the world, maybe just bring attention to the beauty that’s already there, even if the beauty is in unanswered questions.

6.What would be the icing on the cake?
Being in a band with best friend and lover is icing and cake:)

7.How will you be remembered? (what will make you vintage?)
That’s a funny question. I don’t think I’ve ever thought of it before in the context of our band. I’d like to think people will appreciate our honesty and hope. We are what we are whether it sells records or not.

8.Describe your music as if it were a fine wine.
Like a deep velvety robe, with suppleness, grace and charm, that stands alone.

9.AfterMint! Does your musical style influence your underwear?
Not at all. My mood and the amount of walking I’m planning to do in a given day do.

10. Digestive! What do you know about Luxembourg?
Regretfully, I don’t know much about Luxembourg. We’ve played in Luxembourg City twice and Differdange once. I do know this: Luxembourg is a gorgeous country with an interesting history (dating back to Roman times, right?) and we’re looking forward to going back to play/visit (and hopefully learn more about the country) this autumn. Anyone want to give us a tour when we’re there?