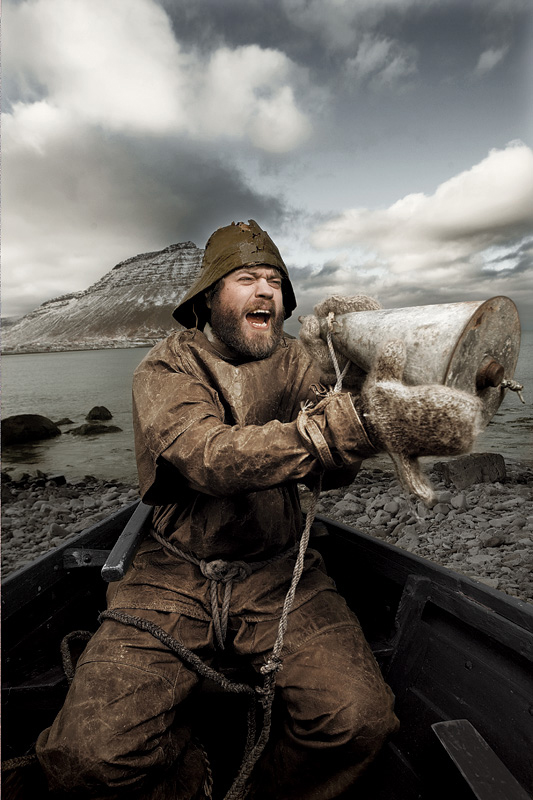 Örn Elías Guðmundsson is Mugison a ‘much easier for me to pronounce’ name for Icelandic born musician and singer. The name in itself has an interesting story. According to Wikipedia, ‘Mugison got his nickname Mugison while on holiday visiting his father Muggi (Muggur) in Malaysia. His father is a karaoke singer and as the crowds at the karaoke bars in the small fishing villages they were touring had problems pronouncing his name they came to call him Mugison. Mugison is the Icelandic naming convention for the surname of someone who is the son of Muggi.’

Originally from the remote town of Isafjordur in the West Fjords Mugison began working as a one man band – utilising a guitar and laptop, “probably stolen from a philosophy student!”, yet is now more regularly seen with band in tow! He’s established himself a reputation for putting on a decent show and has been seen touring alongside the likes of fellow Icelanders Mum, the Super Furry Animals and Queens of the Stone Age.

Matthew Herbert picked up the 2003 release ‘Lonely Mountain’ for release on his Accidental Records label. In 2004 Mugison’s career was publicly elevated through recognition at the Icelandic Music Awards acquiring best album for ‘Mugimama, Is This Monkey Music?’ and best song for ‘Murr Murr’. He has since recorded two further albums Mugiboogie (2008) and Ítrekun (2009). I highly recommend you download the latest single from the website.

1. How did you get started?
My mom and dad gave me a guitar when I was 14. I bought Jimi Hendrix ‘Are you Experienced’ and that was it, I knew my mission.. Grow hair and make noise.

2. What ingredients do you need to mix together to produce the recipe of your sound?
It needs to turn me on, I can only work on a song if it turns me on, then I won’t stop until it’s finished. No song is the same.

3. Did your first gig make you hungry for more?
No, made me never want to do it again!

4. What’s the biggest ‘cock up’ to date?
I shit my pants on stage, I was sick in Brussels few years ago, but tried to play my set. But on the 4th song I shit my pants and had to stop the show.

5. What is it that inspires you to make your music/sound?
Music itself… I can only compare it to sex.

6. What would be the icing on the cake?
When everything falls into place. Ding!

7. How will you be remembered? (what will make you vintage?)
The man who proved you don’t need talent to make good music, only time and love.

8. Describe your music as if it were a fine wine.
You’d have a sip and then ask the waiter to bring you a new one. But you might whisper in his ear you wanted to take that bottle home with you and drink it by yourself.

9. AfterMint! Does your musical style influence your underwear?
Yes, can’t go into it right now, I´ll be explained in my biography that’s released soon by Penguin.

10. Digestive! What do you know about Luxembourg?
Don’t know much, I know it´s born in the middle, did well in school. Has settled down after a period of which Luxembourg herself calls ‘the wild years’. I´ve meet guys who knew her back then. Now she´s married and got few kids. I´m looking forward to seeing her.