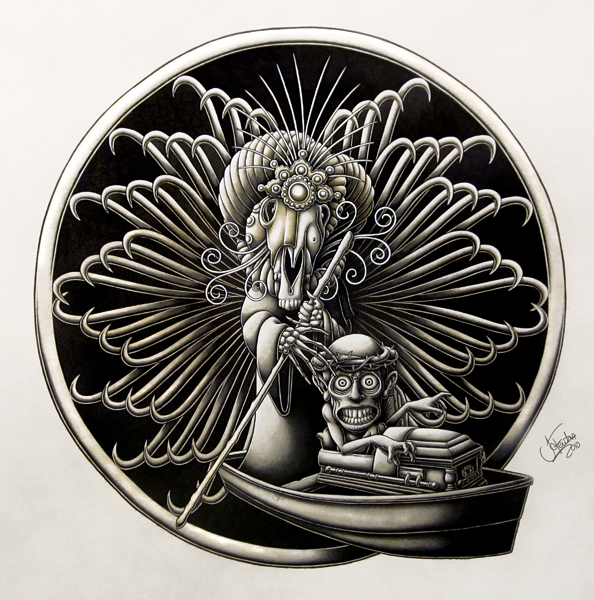 After studying at the Wimbledon School of Art in the UK, Jo Fenton went on to work several years in the film industry. He worked as a film concept designer and sculptor with companies such as Disney and Miramax and worked with directors such as Terry Gilliam. After this period, during which time he was mainly in London and Prague, he moved to New York. Currently residing there it was here he received his first publishing contract for the self illustrated, self written children’s book ‘What’s under the bed?’. The book went on to be a temporary partner with a Cherrio’s box where it found itself distributed in 1.5 million cereal boxes and almost as many homes throughout the USA.

Inspired by old school heavy weights Hieronymous Bosch and Breugal, he also sees inspiration in modern day children’s illustrators – naming Arthur Rackham and Wayne Anderson amongst them. I should also not forget to mention the hint of M.C. Escher found in his work nor the feature of the fantastical and those cheeky religious reference!

1. What would you say is the most important theme in your work?
There are many religious references in my work, whether it’s a Ganesh like character or a grinning Buddha, or a faint crusafix adorning a rooftop in the far distance. Religious references in my work may be interpreted as strange, especially since I am not a religious person. However, I am on a constant journey to find a spiritual solution to give meaning to my life, so I don’t know whether I am mocking religion by having references to it in my work or it comes from a deep desire to experience some of what it has to offer. 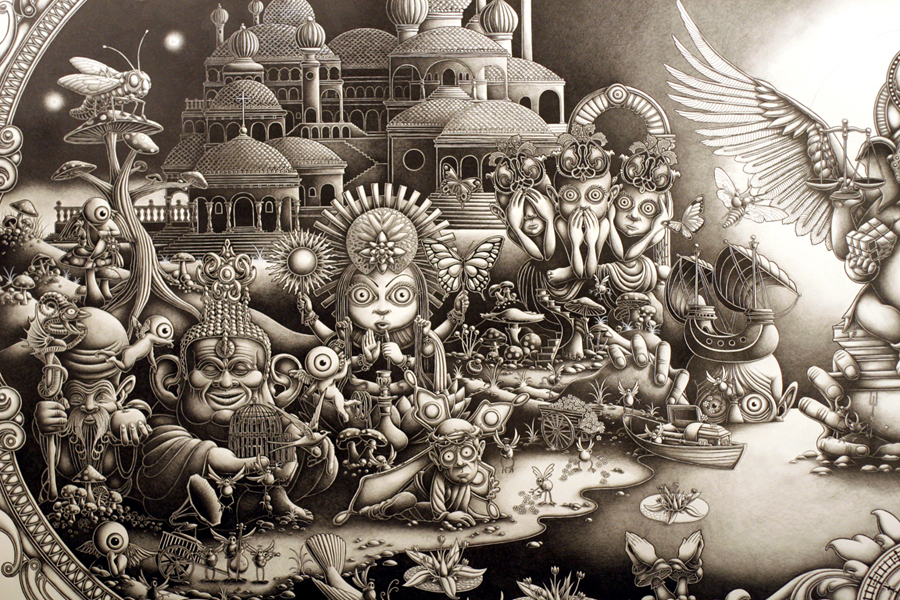 2. What’s most inspiring to your working process?
My current state of mind is most inspiring along with other outside influences such as listening to audio books while I work, looking at books from my reference library, and just observing the general buzz of everyday life as it unfolds around me. Finding the balance between being in my studio and getting out more has always been a challenge for me. The studio usually wins.

3. Have you any strange talents that influence the work you produce or the way you produce it?
I don’t think so. My wife wishes I was a little wackier sometimes like some of the more extroverted artists out there.

4. Which artist of the past would you resurrect to collaborate with and why?
I think it would have to be one of my strongest influences, Hieronymus Bosch. Bosch is one of the great early surrealists, if not the greatest. It would be great to sit down with a cup of tea and share hallucinogenic experiences of our youth and then paint a bloody big picture together. 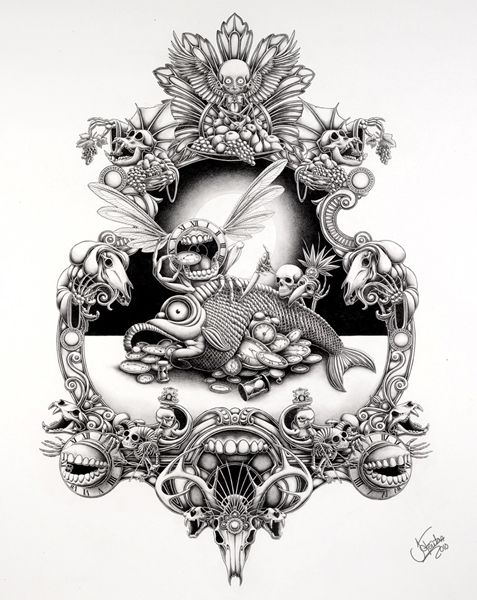 5. Do you think your work is understood or misinterpreted and why?
I think people consider my art to be slightly dark. I suppose it is dark. I’m still in the process of exorcising some old images that have been running around my brain for a while. When this is done you will see my work take a slightly different direction. The light side of human nature fascinates me as much as the dark side. Back to the original question — It’s like everything in life, some people get it, others don’t, and some are just too shy to ask! Having said that, I am always amazed at how some people notice details in my work that I might have missed myself.

6. If you could decorate one place in the world what would it be and how would you do it?
I would love to sculpt a giant figure and sit him in amongst the structures of the Taj Mahal which is similar to the idea I used in my drawing titled ‘Pride”. But quite honestly it would have to probably be to redecorate the inside of my head! An empty room with white walls, floors and ceiling — Ahhhh Peace!

7. What to date has been your ‘cherry on the cake’ moment and what was it that got you there?
I don’t really have one moment. Just to be able to come to my studio everyday and to do the thing that I love the most. The support of my amazing wife is the cherry on the cake. I see people go to work everyday to jobs they despise or generally just tolerate and it makes me that more appreciative of my own life.

8. What we ask everyone! Does your artistic style influence your underwear?
Considering my underwear over the years has generally been bought by my mother or my wife with designs like Easter eggs, Christmas decorations to just plain disgusting colors, I think not!