Based in Portland, Oregon, Dan Stiles is an iconic designer/illustrator. He’s probably best known for his poster work. Collaborations have included music artists from the likes of Hot Chip, St Vincent, Arcade Fire and the Yeah Yeah Yeahs – to name just a few!

He states the influence for his work being a combination of the many different roles he’s had in his education/work life and the various pop-culture environments he has invested an interest in. This range includes old comic books, skate board graphics, modern art, Japanese design and art movements like Art Deco and Art Nouveau.

Now here, he shares some influential responses (especially when it comes to underwear) to the INDIGITS A8!

1. What would you say is the most important theme in your work?
I try to keep it clean and direct. Even the complex stuff is clean.

2. What’s most inspiring to your working process?
I enjoy the sense of discovery that comes from experimentation. I never have enough time to sit and play, but when I do I usually find the results to be both educational and useful for future projects. It’s something I need to make more time to do. 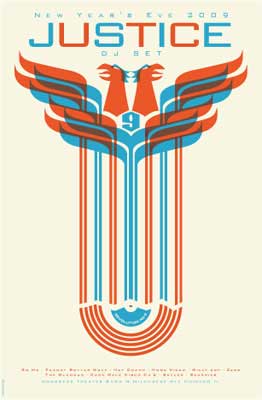 3. Have you any strange talents that influence the work you produce or the way you produce it?
Talents? No. But I do however have a lot of experience in various things that inform how I work. I spent most of my childhood drawing cartoons, so I understand line and motion. I spent my later youth drawing the symbols and typography of punk rock, so I have a good handle on those themes as well as the typographic skills that came from copying all those band logos. Once I started doing posters I taught myself how to screen print. That informed the way I created work with minimal colors and simple bold shapes. Later I worked in digital pre-press where I gathered an array of computer design skills, that was when I ditched brush and ink and went over to working at the computer. After design school I worked doing logos for a few years, that taught me how to pare an idea down to it’s essence and how to convey those ideas in a simple and easy to understand fashion. I would say the sum total of all these experiences created the way I work today. None of these are special talents though, they’re just skills I picked up through hard work.

4. Which artist of the past would you resurrect to collaborate with and why?
There are so many. There was a period between about 1930 and 1970 when so much creative goodness happened. Before the arts were so clearly defined. Graphic designers used to know how to draw, illustrators used to know how to handle type, painters knew how to sculpt. Boundaries are so much more rigid now. I would love to have watched Picasso or Warhol do their thing, or to have interned with Saul Bass or Paul Rand, or been a student at the Bauhaus, or worked with the Eamses’ or Girard. However as rule I’ve found that it’s a bad idea to meet your heros. They’re usually assholes or even worse, totally boring. I prefer to admire their work from afar and not deal with them in person. 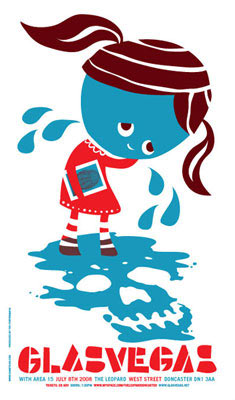 5. Do you think your work is understood or misinterpreted and why?
I work really hard to make sure my work is understood. I’m a designer, my job is to convey a message to people that they can understand. If I leave them scratching their heads I’ve failed. There are no little cards hanging next to my work with an artist’s statement that gives people clues as to what I’m talking about. Have you ever seen Piet Zwart’s logo? It’s a little guy taking an arrow in his eye. That’s the job of a designer.

6. If you could decorate one place in the world what would it be and how would you do it?
It would be fun to paint Bob Burnquist’s mega-ramp.

7. What to date has been your ‘cherry on the cake’ moment and what was it that got you there?
I recently finished a huge project for the X Games, that was pretty cool. I grew up in the world of skating and punk in the 80’s. On the one hand I’m sad that none of that stuff is underground anymore, but I’m happy to see that those sports now have their own Olympics. People used to throw bottles at us when we were out skating, now skaters are rock stars. I get to do posters for bands I admire pretty often as well, that’s always nice.

8. What we ask everyone! Does your artistic style influence your underwear?
The older I get the more conservative I get with my clothes. Nobody wants to see anyone over 30 dressing like a teenager. On the other hand I don’t want to wear the adult uniform of khaki dockers and a polo shirt either. I stick to jeans and black Tshirts. However my underwear is still an item of creative expression. I have several pairs of boxers with little devils on them. Also radios, chickens, skulls, etc. So I guess the answer is yes. Unless this is a question of fit, because I prefer boxers, but my style is anything but loose.