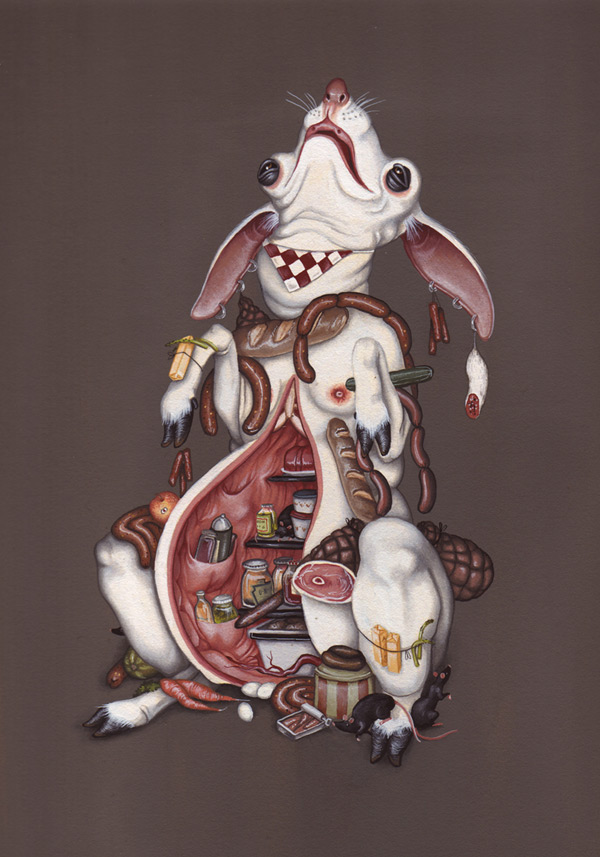 Allison Sommers’ art draws on her interest in renaissance and baroque art. She studied early modern history at the University of Virginia where she was able to explore her love of historical narratives and themes of the old world.

Currently residing in Brooklyn, New York, her work has been exhibited throughout the United States and Europe. In her art you can find the complicated, intricate and sometimes uncomfortable worlds of meat, vegetation and birds and beasts of various sizes!

Working initially in gouache and other water-based media, she has recently been expanding into 3d, working with materials such as paperclay, polymer clay and bronze via the lost-wax process. She says inspiration is found everywhere, but she takes especial pleasure in warty or lumbering beasts, tiny fat birds, and the grocery store meat department.

INDIGITS is far from “abandoning deference” to have her on the A8!

1. What would you say is the most important theme in your work?
Profanity? That is, in contrast to the sacred. I want to defile, to laugh at, seriousness and piety. It’s all a good clever joke.

2. What’s most inspiring to your working process?
Keeping a sketchbook is the most important inspiration through the process– nearly everything that lives in my worlds was born somewhere in a sketchbook. They end up as messy encyclopaedias of bad puns and creatures and plant life. 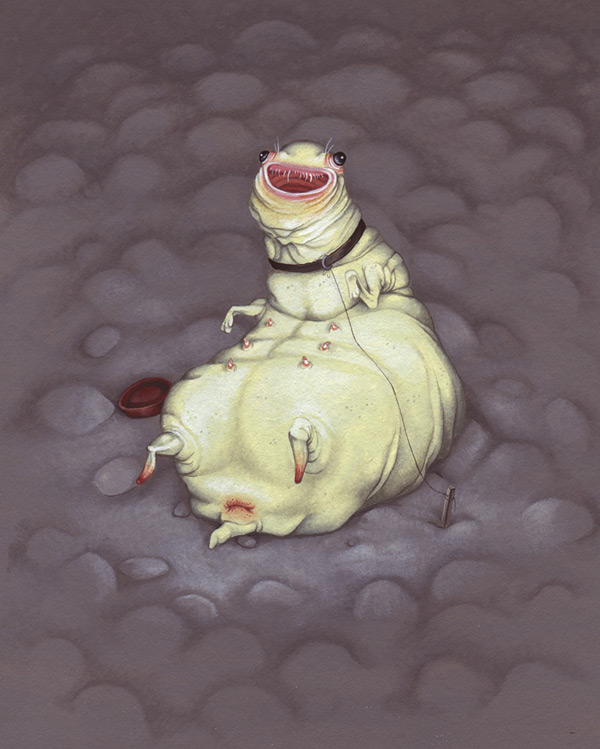 3. Have you any strange talents that influence the work you produce or the way you produce it?
I have terrible shaky hands, and I believe that a bit of my ability to work very detailed and tiny is that I’ve spent a long time learning how to force them to be very still. I’m usually tense and white-knuckled on the brushes but it gets the job done.

4. Which artist of the past would you resurrect to collaborate with and why?
I would want to work with those brilliant soviet-era animators! Especially the stop-motion. It seems like a lot of them worked rather anonymously, but some of that stuff is brilliant. That is exactly who I would go to, to animate my work.

5. Do you think your work is understood or misinterpreted and why?
I’ll start by saying that it doesn’t matter, that’s very important. Like anyone, I can’t actually communicate what I actually mean to another person, so of course my work gets misinterpreted. It completely blows me away when I meet or talk to folks that really, really get it, though– and I’ve certainly met a few– it makes me feel like I’m standing in public in my underwear, I’m always astonished when I can make that connection with another person. 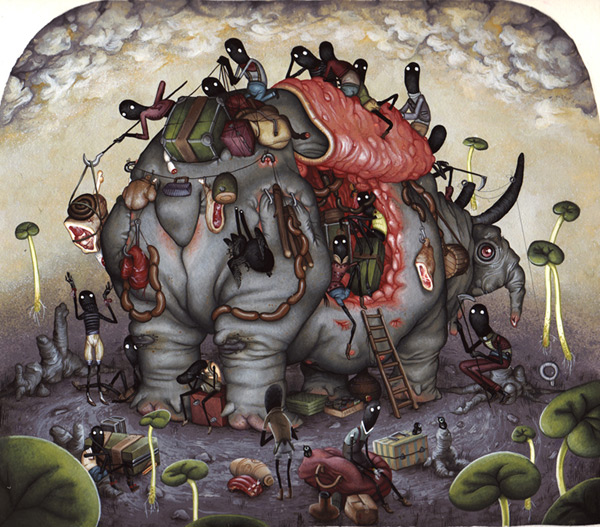 6. If you could decorate one place in the world what would it be and how would you do it?
I thought of a few answers to this that I oughtn’t to say because they would get me in trouble. Sacred places, anyway. Penises on the popes.

7. What to date has been your ‘cherry on the cake’ moment and what was it that got you there?
I felt mighty chuffed during my last show, Schlaraffenland, at Thinkspace.

8. What we ask everyone! Does your artistic style influence your underwear?
If it did, I would be really worried.