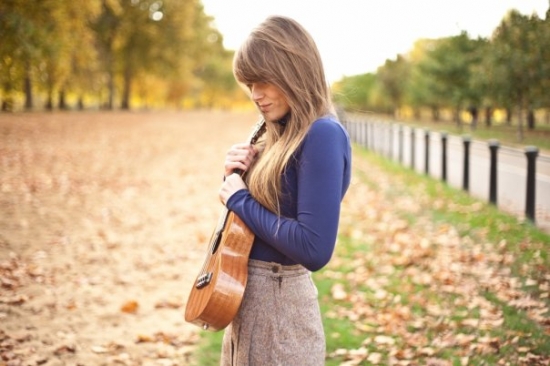 Brighton based musician Sophie Madeline is ‘bringing the Ukulele back’! She’s got two albums under her belt and has a synonymous reputation on the internet as the ‘Queen of the Ukulele’, practically starting a movement that’s given the stunted guitar back its street cred! This UK folk singer speaks of classic influences through Gershwin, Ella Fitzgerald and on to The Beatles. Starting to make music from the tender age of 5 she eventually graduated with an MA in a Songwriting from the Bath Spa University. A noteworthy musician, a steady fix in ‘Sophieland’ & now found here on INDIGITS!

1. How did you get started?
Playing ‘yankee doodle’ on the piano – aged 5. Later I progressed to playing the guitar and the ukulele as well. Then I wrote some songs, studied music at unversity, and eventually ran into a bit of good luck.

2. What ingredients do you need to mix together to produce the recipe of your sound?
Hmm… I suppose it would be a base of half ukulele, half guitar. Mixed with a little bit of whimsy, a few broken hearts and a pinch of naïve optimism.

3. Did your first gig make you hungry for more?
In all honesty I can’t remember my first gig. It’s not really the live aspect of music that I enjoy – I’m not a natural exhibitionist. The thing that made me ‘hungry’ was the satisfaction I felt when people would tell me they’ve been moved or affected somehow by one of my songs – regardless of whether it was played live or on a CD.

4. What’s the biggest ‘cock up’ to date?
I can’t think of anything especially bad that’s happened during my career so far. How dull. Have you seen the film ‘The Holiday’? That’s a pretty big cock-up. But I had nothing to do with that, thankfully!

5. What is it that inspires you to make your music/sound?
It’s a mixture of wanting to express myself, and a desire to make as many people happy as possible. Plus, I need to pay the bills and I’m not especially good at anything else!

6. What would be the icing on the cake?
I’d like to tour the world and get my music into lots more ears!

7. How will you be remembered? (what will make you vintage?)
I hope that I’ll be remembered for my songs. I’ve always tried to write songs that are timeless. In other words, songs that are still memorable even when you strip them down to their most basic state.

8. Describe your music as if it were a fine wine.
Fresh, fruity and light.

9. Digestive! If you weren’t doing what you are doing now, what would make you happy?
I have no idea. Like I said – there’s not much else I can do well. And if it wasn’t for music I’d be lying in a ditch somewhere. As long as I could have a cat and a house by the seaside then I’d be happy.

10. AfterMint! Does your musical style influence your underwear?
Absolutely. Ukulele pants, all the way.